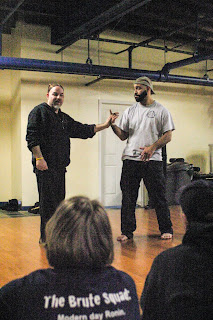 I had the pleasure of Guro Davidson’s teaching at several seminars.  I had been drawn to silat in high school because it seemed to offer much more complexity and subtlety than what I saw in the bulk of martial arts schools I had attended. I could tell from the movements in the silat system I began at that time, that there was much more to the art than was being taught—either because my instructors kept it to themselves or, more likely, had lost touch with the depth of their art and had homogenized it.
After 7 years I felt I had learned relatively little of use, relatively little to differentiate it from any other run of the mill martial arts school save for some stylized movements in jurus whose martial application was neither practiced nor explained.   I chose to change arts but my desire to learn what I considered to be effective silat continued.
That desire was first sated during seminars with Ka Jeff.  His instruction on those few occasions at seminars restored my hope that I may again find good instruction.   He is a very approachable, humble and inquiring martial artist and instructor and generous in his teaching approach.  I may very well have learned more from him about silat in a few hours than I had in the 7 years I spent training long ago.  He is a clean, crisp and sensitive/perceptive practitioner and his understanding and application of techniques is nuanced, subtle and precise.  Most importantly, he knows how to teach what he does.
He is also the only person I have seen teach an authentic african martial art—which was a pleasure to be introduced to.  And he learned it there, off the well–traveled path, doing it.
His breadth of knowledge on Malaysian Silat, Kali, and African martial arts of Yoruba is impressive as is his ability to integrate them. Were it possible to make a daily 900 mile commute I would attend his school in a heartbeat.  If any serious martial artists need a reason to tour Detroit, Michigan, you’ve got one.
Ed